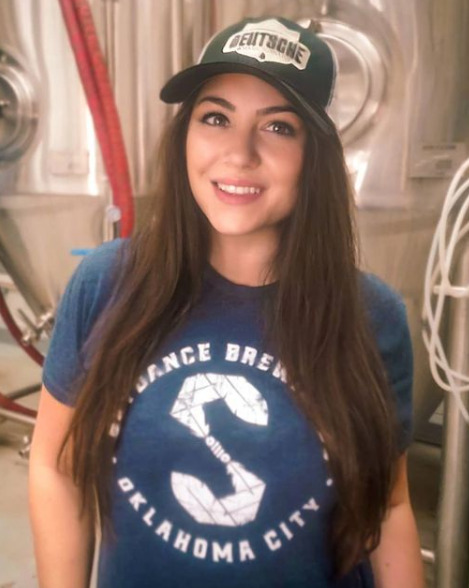 Who would have thought that @thebrewbabe was originally not a fan of beer? She began exploring breweries in the tri-state area and slowly developed a taste for it. But she says it wasn’t until she went to a Long Island beer festival in 2008 that she fell in love with craft beers. She says, “I stopped by a homebrew table and was blown away by the creativity of these homebrewers. I joined their group, bought my first Mr. Beer homebrew kit, and haven’t stopped brewing since!” Aside from her extensive Instagram and Outcask.com blog following, she is now the assistant general manager of a brewery as well. And she is lucky enough to work for one that celebrates the achievements of women every day – being that both their Assistant GM & Director of Operations are both female! Michelle was diagnosed with Celiac Disease shortly after she fell in love with craft beer. But that didn’t stop her. She has made a name for herself in the cider and gluten-free beer communities. Both her social media profile and blog provide educational experiences on beer and cidermaking, reviews and information on being a gluten-free beer lover. “All that matters is you do what makes you happy, give back to others, and show gratitude for the gifts in your life.”

Like many Americans in 2020, Michelle found herself unemployed in the midst of the pandemic. She applied to hundreds of positions to no avail when, she explains “someone dear to me told me I could either wait another year with the same deck of cards in my hand, hoping it will change … or I can pick up a fresh deck with brand new options. So I put down my deck and picked up a new one. I left everything and everyone I knew behind and traveled alone to what feels like a different planet!” She admits “My favorite part of working in this industry is WORKING! I wasn’t fortunate to keep my job … and travel opportunities last year due to the pandemic.” She accepted an Assistant General Manager of Skydance Brewing – in Oklahoma City! In this role, she has the opportunity to participate in a little bit of everything brewery related: production, taproom, marking, events and more. She is thankful for this new chapter and says “Being part of a team and having a purpose again makes me the happiest. From exhausting production days to marketing our next can release, I truly love it all. How many people can say that?”

But not everyone in her male dominated industry has been quite as welcoming. “I believe there are barriers for everyone. As a woman, I’ve dealt with my share of sexism and misogynist comments, but I’d like to think we are moving in a different, more positive direction.  Last year, a photo of Michelle and 4 other women in their swimsuits was posted and spread through Twitter without their consent. All of these women have built a name for themselves within the cider industry. The photo was captioned “Girls be promoting cider-like…,” insinuating that these women use their bodies to get attention and promote cider. This diminishes the hard work and dedication these woman have put into molding their craft and building their businesses. “When the situation first occurred, I took this as an opportunity to educate our industry so we could continue to foster a safe environment.  I immediately spoke up on my social media platform through my IGTV Night Live. I shared my statement and dedicated my segment to those who wanted to share their stories: the women who were involved, businesses supporting equality, and craft beer and cider enthusiasts who also felt it was important to show their support. These women came together to combat the sexism within their industry and continue to be supported by the cider community. “The more we speak about issues that still arise, and educate people on ways to act inclusive, the better the industry can become as a whole … The best part of her campaign is that she keeps it alive with new educational projects.” She says there are more positive people than negative – to never let the opinions of others cause you to lose focus on your goals.

Michelle is our first Woman of the Week frequent user of CBD. She suffers from chronic pain, depression and anxiety and finds relief with its use. She says “my go-to includes non-alcoholic THC Free seltzers and oils. I only take it as needed but I see a significant difference when I do!”

My cart
Your cart is empty.