Woman Of the Week: Kim Adragna 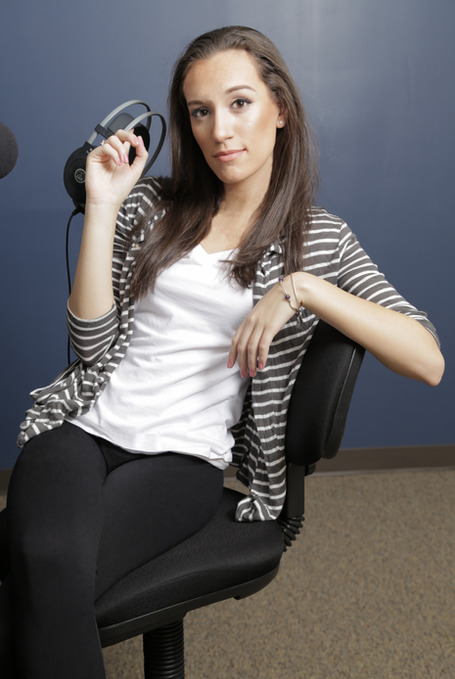 Kim began her career in elementary school, singing everywhere from around the house with her mom to choir competitions in Disney and Virginia Beach. It was not until college that she became interested in radio – becoming one of the founders of Farmingdale State College radio station. She admits “I give major props to Elvis Duran and the Morning Show for sparking that interest as I would listen during my commute to my 8 am classes.” Through that same Farmingdale radio station, her passions grew to include podcasting and voice-over acting. Her list of talents eventually grew to: songwriter, actress, model, videographer, editor, writer and producer. She says “I’ve always been interested in being both in front of the camera and behind the scenes. I think once you’re involved in one aspect of the industry it’s easy to want to dive into everything else as well.”

Kim has evolved as an entertainer over the years. She learned lessons – and most of her skills – through practice, and evaluating what works for her and what doesn’t over time. She says natural ability will only take you so far. “This is an industry of training – no matter how great you naturally can be on stage, behind the lens or behind the microphone you still need time and experience and training to find your voice. Talking on the microphone is the easy part, it’s learning how to convey a story or message to someone efficiently that will resonate with them.” And Kim says this comes with time and experience. And she has learned a few other things along the way – learn to graciously accept constructive criticism, have confidence in yourself and your work, and allow yourself time to decompress, breathe and live in the moment. “I want to sound the best, I want to collaborate with people, and I want the best sound for any project I’m working on,” says Kim, and she does this through collaboration, determination and a little bit of self-care. And it is paying off for her.  “After graduating college and after 6 years of hard work, networking, creating, learning, collaborating etc. – now I co-own a business, a recording studio, and I’m one of the hosts on The Grindhouse Radio, a pop culture show with a celeb guest every week, & The Magic KimTom, a Disney/Themeparks podcast” with a listenership of millions per week on iHeartradio, Spotify, iTunes, Google Podcasts – anywhere you listen to podcasts. I’ve booked voice over work such as commercials for major brands, voice characters on kid shows and have two fantastic shows with amazing co-hosts who are not only talented hosts, but talented voice actors and great friends.” Kim is evidence of what happens you choose simply to not quit.

She feels fortunate to have had that supportive family of coworkers from the beginning, so she says “I’ve never felt like I had to overcome anything with them or wave my hands to make my voice heard. I’m also a go-getter who knows where I stand & want to be in life so I never made it an option for people to think that I had to break through the glass ceiling. I just smashed it myself – why wait and have permission to do so?” She feels fortunate to have always had the support of her business partners and coworkers. But this doesn’t mean she hasn’t been met with barriers in the industry. Kim has had to be persistent and driven to pave a path for herself in entertainment. And she has some advice for aspiring entertainers and job seekers alike – “I will say in terms of barriers – there are many talented women out there who all want the same role, who may have the same look or similar voice as me. So how do you overcome that and book the job? You have confidence in yourself, you get what you need to book it, you network and build relationships cause that’s what people like. Put in the work and be yourself. You’d be surprised- that attitude will book you more than the audition itself. I’m a strong believer in positive vibes and what you put out is what you attract.”

And Kim certainly puts out positive vibes. She has a quirky, cool &  fun personality and is a huge proponent of women supporting women, finding & sharing inspiration, and body positivity. In fact, she was invited to the United Nations Women’s Guild in New York City for the International Day of Peace. The United Nations Women’s Guild was founded in 1967 as a voluntary organization of women connected with the United Nations. The purpose of the Guild is to foster friendship, to encourage appreciation of each other’s traditions and customs, and to financially support charity projects benefiting children of the world with emphasis on developing countries. Kim calls this event, “one of her proudest moments, spreading positivity and empowering women, men and young children.”

But Kim’s biggest message to everyone – “It may sound cliche, but you have one shot to create something magical for yourself – so you might as well make the journey a beautiful one. If there is anything you can take from this – it’s to start. You’ll thank yourself later.”

My cart
Your cart is empty.